SILVIO stands for "simple loudness visualisation" and can be downloaded for free in the apple app store. I was part of the team that developed this app for the new european broadcast norm R128. It was first presetned at Tonmeister Tagung 2012.

Audiences around the world feel the existing, ever-changing audio levels during consumption of radio and television to be very annoying. Reason for the inconsistency of audio is the adjustment of audio level to its peak, which is common in broadcasting today but doesn´t match our process of hearing.

The EBU Loudness Recommendation (EBU R128) gives definitions of signal parameters like program loudness, loudness range and the maximum true peak to do justice to the human hearing sensation and should homogenize the audio level during the program.

For that reason a lot of new measuring devices and software enter the market to monitor these parameters during the production for broadcasting.
Since Apple`s iPhone and the iPad conquer the studios a team of students of the University of Applied Sciences Düsseldorf developed an EBU R128 Loudness Meter for IOS devices. 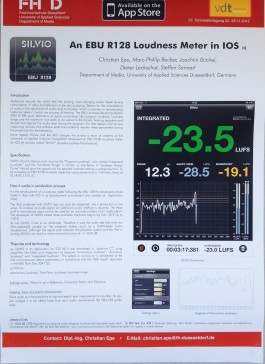